To have  consistently great breakfast every day was amazing. For someone who doesn’t have breakfast, it was rude not to tuck in, after all it was fresh and damn tasty. Today’s excursion was to Santa Cruz and in particular to Bachas Beach.  We were told by William that its on this beach that sea turtles come to lay eggs and we may see some if we were lucky. 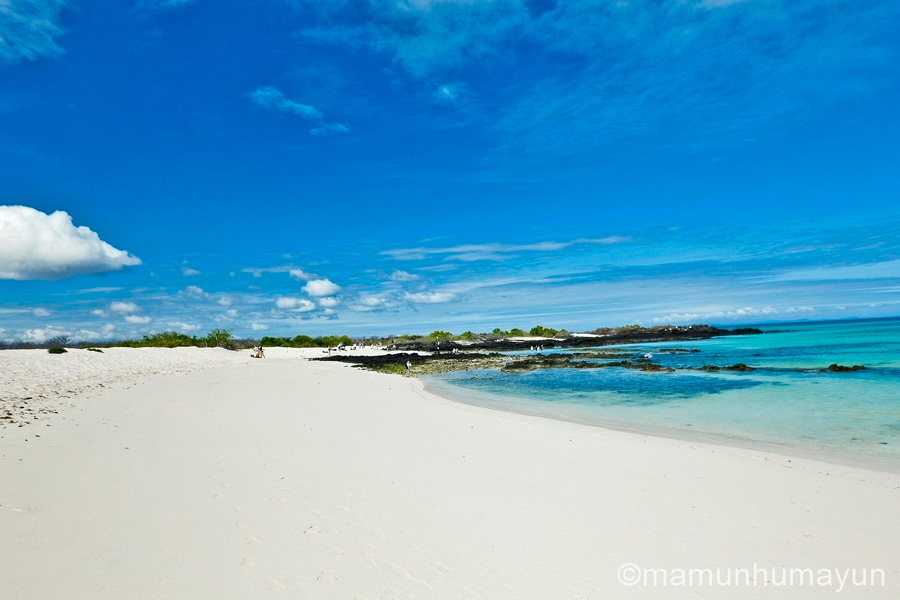 So as the boat laid down its anchor in the deep ocean, the ones who wanted to go went out on the panga and straight to the beach. This would be a wet landing as there was no jetty. Looking back out into the ocean we could see the Galapagos Voyager, our boat.  This was a small group this time as a few people wanted to rest back on board.  There was four of us plus William. The first thing I’d noticed was the Sally lightfoot crabs and a few Iguanas perched on the rocks. William casually guided us across the beach and over a small sand dune to which he noticed sea turtle tracks, everyone was actually excited but that excitement dampened as William said the turtle had already come and gone, but the tracks were still clearly visible. This showed us that nature has its own timetable and doesn’t wait for paying tourists. It was a shame we didn’t see any sea turtles but we had already seen so much it wasn’t too much of a downer.
We followed the turtle tracks and William was explaining to us, how the female comes ashore and makes her way inland, finds a spot and digs a hole so she can lay her eggs. He mentioned that a sea turtle will always come back to the same island to lay her eggs. As we crossed the ridge, about 50ft away was a lagoon and this is where we were told the Flamingos usually hang out.  There were none to be seen though, but William suggested we wait a while to see if any turned up. Whilst we waited, just on the waters edge were some iguanas,  which I filmed and just watched as they stood motionless with their bodies facing the sun. We all knew that seeing flamingos would be a stretch. After about 40 minutes we made our way back to the beach.  It was there we found out that one of our number had fallen ill and had to be taken to the hospital on the main island.  This meant we would be  stranded on the beach until they got back. William explained to us what was happening and that everything was going to be fine, the only downside was that we would be on the beach longer than planned. We were worried about our friend but were told he would be fine.   With such assurances, we were on a beach, the sole humans on this island in the pacific ocean for a couple of hours.  I decided to wade through the water and capture the waves on the rocks and some iguanas.  Pelicans gently glided past us, no more than 3ft above the sand. It was magnificent to see. Just watching the wildlife, made the time pass so quickly and as soon as it was over, the panga was on the beach ready to take us back to the boat. We were informed that our fellow traveler would be kept overnight for observations and would join us the next day After lunch, I sorted my camera gear out and changed the batteries, putting two on charge and taking the rest with me. The afternoon excursion today was a visit to Black Turtle Cove, it was a 10 min ride on the panga across the ocean and once we entered, another 10 mins to reach the cove. On our way through the mangrove swamps, William was telling us about the wildlife and fauna that grows and exists here. It actually felt like a BBC nature documentary, passing through the mangroves, ducking your head and pushing away branches so we could pass. The waters were calm as we made our way through, slowly turning with paddles so as not to disturb the wildlife, everyone on the boat was looking out intently for any sign of life. William would every now and then ask for the paddles to stop and he would scan his surroundings like a hawk, squint and see if he could see any movement in the mangroves. It was hypnotic to see (https://vimeo.com/27832880), and over time, we would mimic him and in doing so learn how to look for wildlife. As we made our way twisting and turning, we came to a place which seemed like a dead end, and just then underneath the water we saw giant sea turtles swimming. Collectively we all felt a sense of humbleness.   Soon after we saw two sea turtles in a mating embrace swimming. It was one of those ‘wow’ moments. It didn’t stop there, two rays went gliding past followed shortly by some white tipped sharks. William made a point to say that it was rare to see all of these in one excursion.  We must have been ‘the chosen ones’ he quipped. 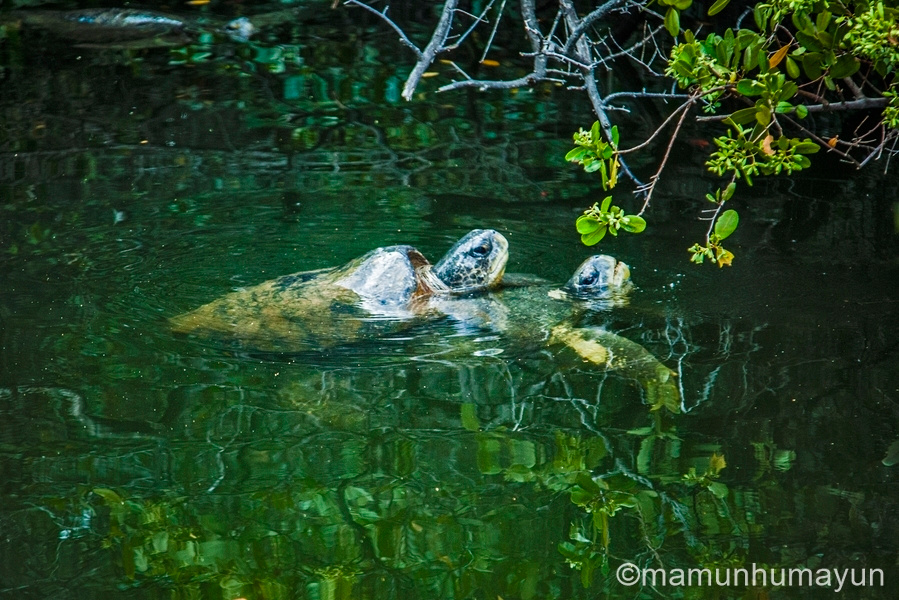 Later that evening, and like most evenings before, I went out on deck to see the sunset. I’ve seen a few sunsets around the world but here its different, its special, it adds purpose. Collectively we all felt a sense of humility.. As the the light was slowly fading, a lava gull landed and casually walked across the deck. The lava gull is one of the rarest gulls in the world, the entire population lives on the Galapagos Islands and is estimated at 300-400 pairs, so to see one was pretty amazing.   As it was walking back and forth, I also noticed a Frigate bird perched on the railings, I had my 70-200 f2.8 attached and with a steady hand and pose I fired a few shots, followed by filming it (https://vimeo.com/album/1593075/video/29011764) , then I just watched while the sun set.  It was a fantastic feeling with the gentle sway of the boat on the water.