First thing I heard was, ‘Happy Birthday, you’re old’ followed by laughter. So this was the day, my birthday, my 30th and here I was waking up on boat, moored in Darwin Bay, Genovesa Island in the Pacific. That’s something to tell people when you tell them how you celebrated your 30th.

Like days before, we had breakfast to fill our stomachs and got onto the panga and off we went for our morning excursion which was a ride along the sheared wall cliffs, looking out for red footed boobies and seals. The jagged cliff face was covered in bird faeces, almost making it white rather than the dark lava grey colour of the rocks. As we contoured the cliffs, we noticed a pair of seals . They seemed to be sleeping in the shade, in fact they were just resting …. If you looked you’d notice their eyelids move, followed by a few small shuffles. After a couple of minutes. After a few more minutes watching the seals, we turned the panga round and headed to Prince Phillip’s Steps in the southern part of Darwin Bay. The night before we were told by William that we’d be walking along a 1.5km trail on the cliffs and we should expect to see Red Footed Boobies, great frigate birds, Nazca Boobies, Galapagos Storm Petrels, and short eared owls.

We took caution climbing up the steps which were at times steep. We all gathered round William for a brief group talk and then we were on our way, walking past nests and seeing Red Footed Boobies. Someone in the group asked the question as to why they have red feet and William response was that they don’t know, he also remarked that the red and blue footed species of boobies never crossed paths. I noticed a Red Footed Boobie perched on a branch,  the webs on the feet are more flexible than the other species, because they perch on, and nest in, trees. I was no more than 3 feet away and with all my encounters with wildlife here at the Galapagos, I was just entranced. It’s unlike anything else…this is wildlife that is untamed and has not suffered at the hand of humanity. The wildlife have no fear of us, and thus the interaction is more personable. The wind would slowly move the boobie’s feathers, so every now and then it would stretch its webbed feet to get a greater hold on the branch.  It was truly a magical experience. As we continued walking, I caught sight of two Nazca Boobies.  They appeared to be checking each other’s feathers making sure they were clean, fit and proper. It put a smile on my face, as it mirrored the sense of love that some of us humans have for one another and here it was, in nature. 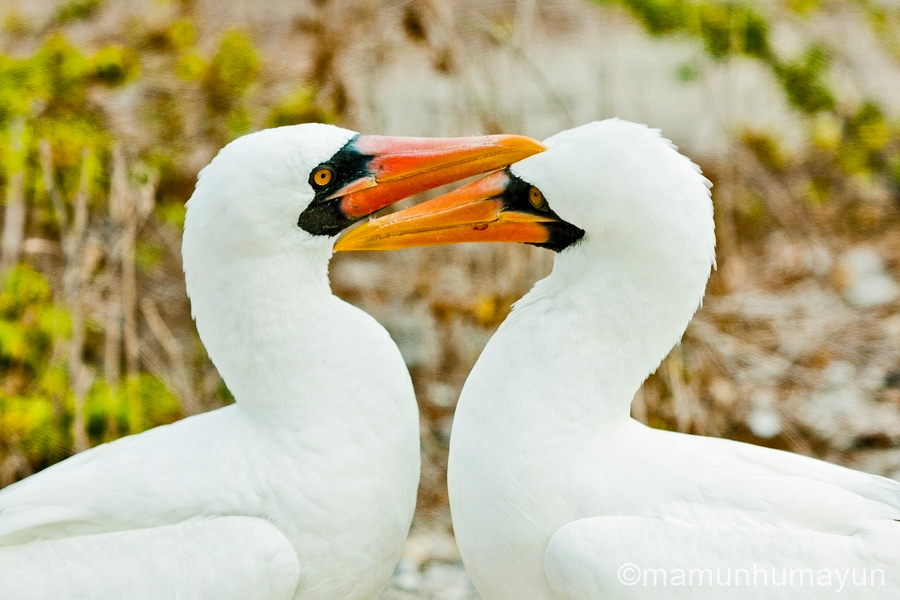 https://vimeo.com/album/1593075/video/29561363 Next we came across what seemed like a sea of Galapagos Storm Petrels, William said there was probably a few hundred, flying just by the coastline above the waters. It was hypnotic to see, just following the dark shadows in the air and tracking the huge swarms move was an experience. You see it a lot in nature programmes and may see it in your local park, but out in the pacific, with nature as raw as this, was awesome. While our gaze was fixed on the swarms, William caught sight of a short eared owl through his spotting scope. It was an impressive spot to say the least, the bird was at least  600 ft away, perched inside a small cave. He quickly gathered us around to see it through the scope as it was rare to see and he was quite happy with the find… I think we were all amazed. Later on when we got back to the beach, we had some time to ourselves and for those who wanted to there was the option to snorkel.  William decided to snorkel today, it was the first time we had seen this and it was great.  I took this moment to have some time to myself and and walk round the marked path near the beach. It was emotional at times not only because it was my 30th but i was thinking back over what I had achieved up to this point in my life and also where I was heading. I thought about my family and the fact that my dad wasn’t alive, and that he would never know what I’d done and achieved.  He passed away when I was 11. All the emotions were strong, but there was an immeasurable scope of joy and a great sense of achievement, to be standing and looking out at the sun, with sea lions no more than a few feet away and birds flying overhead, it was truly heartfelt and it meant so much to me. It’s moments like these that you truly can’t describe in words. That evening back on the boat the crew made me a birthday cake. An actual cake …. a sponge cake, with icing. It really took me by surprise but was such a great thing, they all sang Happy Birthday to me in Spanish which is something that I will remember forever.  We all had cake and spent the evening celebrating my birthday. The crew and my fellow travelers were just amazing and to celebrate with me meant a lot, we were merely strangers when we first met but for that evening, we were family.  Before we all went to bed, we met with William to discuss the excursions for the next day. A long cruise to Sullivan Bay to see strange lava formations and lava lizards.