The sounds of the engines and the slight rocking of the boat made me aware that we were on the move, and had been throughout the night. After breakfast, we all dispersed some going to the top deck to relax on the sun loungers, others to the bow to watch the world go by. It was nearing the end of this magnificent adventure and it felt like we all needed time to ourselves just to take it all in and appreciate what we all did, witnessed and experienced. As we approached Sullivan Bay, from a distance you could tell it was a strange land, with contrasting colours of sand and dark charcoal with brushes of vibrant green dotted around. It looked surreal, like a strange painting. The boat stopped in deep water and we all climbed aboard the panga for a closer look. We made our way towards the rocky coastline where we saw penguins! Penguins which normally live exclusively in the southern hemisphere, most famously Antarctica. Yet here they were in Galapagos. Just when you thought you knew everything about the enchanted islands, they would show you something new. The Galapagos Penguin is the only penguin that lives north of the equator in the wild.  William told us they can survive due to the cool temperature of the Humboldt Current and cool waters from great depth brought up by the Cromwell Current. Another fact learned was that these were the third smallest species of penguins. As we circled the outcrop of rocks where there were two birds,  I managed to grab a few frames, but being on the panga it was difficult to get a clear photo.  It didn’t matter though as just seeing them with my own eyes was amazing. After this we went on land and walked over the lava formations. William said we should keep moving as the excessive heat being generated by the sun was heating the black lava up to ‘beyond hot’.  He told us that if we had arrived a few hours after midday then the rubber on our shoes and sandals would melt. So with that stark warning, we moved swiftly following William over the lava, jumping over cracks and over folds in the rocks. The landscape was ‘alien’ with very little life. It reminded me of the lava fields on the Big Island in Hawaii. Eventually you’d spot small signs of life in this harsh environment.  Small cactii sprouting up between the cracks. The walk eventually went around the lava fields and back to where we started, just in time for lunch. After lunch it was a short sail to Bartolome, where we would climb to the summit and witness that postcard view that I’d seen so many times in my pre-trip research. It was a such a great day, blue skies with wisps of clouds, the views from all around were just stunning, it was a visual orgasm. It took about 40 minutes to reach the summit, stopping a few times along the way to catch our breath and take in the view. At the summit the views were breathtaking, the way the islands were in view surrounded by the water was a sight to behold. As far as the eye could see, lay the majestic constantly changing Galapagos landscape that had formed over the millennia. We spent about an hour just taking it all in, snapping photos, and every couple of minutes just staring out into natures wanderlust.  This was the beginning of the end of this life changing trip for me and my fellow travellers whom I shared this once in a lifetime experience with. With our emotions high in the clouds, we all merrily walked down from the summit, talking, laughing and smiling, deep in thought knowing what we’ve all witnessed and seen throughout our time here on these enchanted islands. 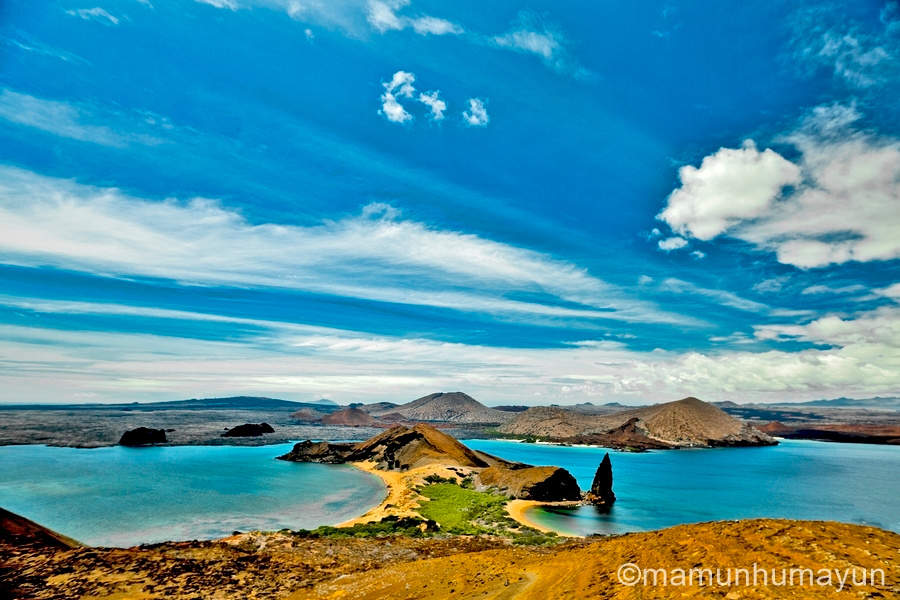 After lunch we were on a long sail to Puerto Ayora. A few hours went by and a few went to sleep whilst others were on deck. William quickly rounded those on deck to the bow as the captain had noticed a group of dolphins swimming with the boat. We all rushed and leaned our heads to catch a glimpse and there they were, a pod of dolphins, jumping out of the water and some swimming very close to the boat. It was truly magical and to have been witness to it was amazing. Just when you thought you’d seen most things, the Galapagos would surprise you once again. Everyone was ecstatic.  With the emotions running through us all, we were elevated to a new state of mind.
I decided to stay on the boat that evening, a few went to the island to sample the night life.