Another day … well it was 16th Jan to be precise…early wake up call. Had breakfast and got my gear ready and we all jumped in the panga for the ride to Plaza Sur, which from a distance looked like some alien world.  Patches of red vegetation and cactus trees standing tall, it just didn’t seem right, but it was there.

Upon landing, we came across a family of seals of all ages, some playful and some just chilling on the rocks. This was my first encounter with seals, and wild ones at that. It was weird yet wonderful at the same time. Slowly walking past them and stopping once in while to take photos and capture footage on my camera we all converged on an open piece of rock where William talked about guidelines.  These were (in his words) follow me, do not touch the animals, never wander off the path we’re walking, and his key point … was that we stayed together as a group.  This last point was for safety and safety was a key issue for William during our time on the Galapagos Islands. To our left were a pair of Swallow-tailed Gulls beside a cactus, further up from them, were a pair of iguana’s motionless, just getting some heat from the sun. We all slowly followed William, I was towards the back taking photos.  As I walked slowly I made sure I wasn’t too far away from the group. The landscape was weird … Strange cactus’s amongst a desert landscape … but in the middle of ocean. The days of thinking cactus’s only grew in desert was wiped swiftly from my brain. But this was a desert of sorts, very hostile with the midday sun beating down and without sun tan lotion, you’d be in some serious trouble.  William would always talk about staying protected, it may be beautiful but the sun is also dangerous he would warn us.
This was the first real taste of island wildlife in the Galapagos, standing on the rocky cliffs, all you see is ocean, the vast expanse of the pacific and look the other direction, you’d see another island. It was at times surreal and I had to keep thinking, ‘I’m really here.   This is the Galapagos’. It was one of those pinch yourself moments in case you woke up from a crazy beautiful dream. I would go on to have more of these moments as this trip progressed. Our afternoon excursion was to Santa Fe to see some land iguana’s. It was here I took a photo of one eating a cactus. You wouldn’t think that an iguana would touch a cactus, let alone eat one.  However here, in front of me nature has through natural selection enabled this iguana to eat cactus’s. This was mind blowing. You see these nature documentaries talking about evolution and natural selection, but to see it in the wild, with your own eyes, is mind-blowing. 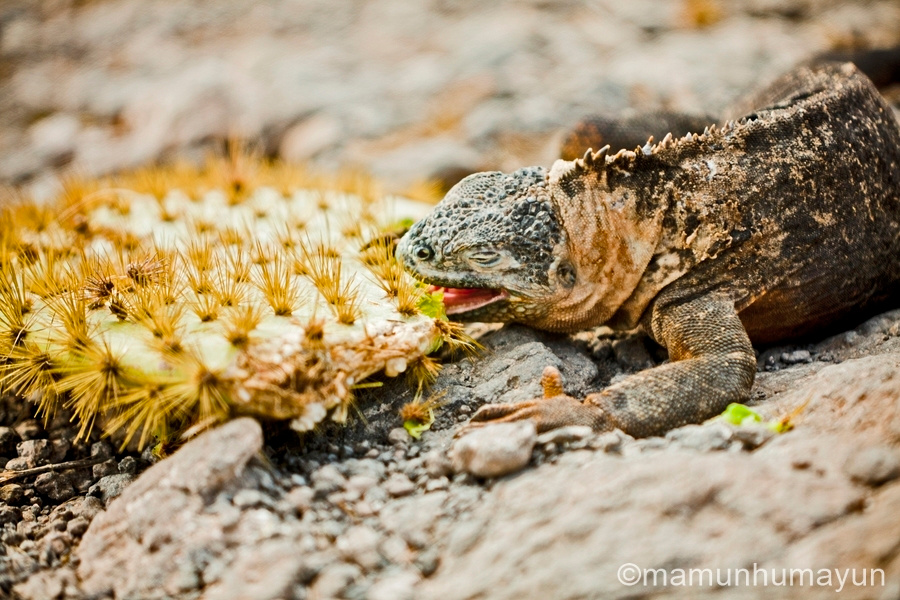 We headed back to our boat due to the sun being at its most extreme, the heat was strong, the rays burning. Once on the boat we all had time to relax, some went to sleep. William said that we could go snorkeling if we wanted, and to meet him at the back of the boat in an hour if we were interested.  The hour passed and I took the chance to snorkel.  First I had to get a wetsuit in my size, and then I actually had to get the thing on!  There was only about 5 of us snorkelling as we headed out on the panga into the blue waters of the Galapagos. I’ve swam before, not just in a pool but in the open seas, but this felt different, as I put on my fins and adjusted my snorkel, I just went in, the blue waters bubbling around me and then seeing the underneath the water, the coral, the fishes and the colours, it was amazing. It was then that I accidentally let go of my snorkel, luckily it was tethered to my mask, but I didn’t realise, so had to get back on board the panga to sort it all out. I went back in again, the water was cold at first but with the beating sun you didn’t notice it nor worry about.
In the evenings when the sun went down, we would all gather for dinner followed by a brief talk by William about the next day, what we would be doing, what we would be seeing and he would give us the general overview as not to give too much away.