…With the windows down, the summery breezy air going through the bus, I sat there just looking out, seeing what looked like a desolate landscape going by, the gentle hills and slopes covered in light shrubbery. I didn’t know what to think at this point. Should I be excited, happy, amazed, I just didn’t know, but what I did know was that what I was doing was big, I was sure of it. The bus didn’t seem to be going fast, but that was probably because we were going down long straight roads with a landscape that had no discernible markers. Of course there’s always the ground to look at, but if all you’re seeing is the same type of ground, your mind plays tricks on you. Off in the distant I saw what looked like distant mountain ranges, but in fact they were hills. It was wonderful to see the landscape go by, I had my thinktank camera bag by my side, I didn’t go for my camera, though I placed my hand firmly on the bag, and was slowing tapping with my fingers, as if i was waiting for the right moment to photograph, I didn’t want to ruin the experience of being somewhere wonderful, I just wanted my eyes and mind to soak it all up and to prepare myself for what was to come. William stood up and said in about 15 mins we’ll be visiting the National Park Tortoise Reserve. It was slowly dawning on me that this was really happening  (after a short while the bus made a right turn and we were not on paved roads anymore but on gravel and mud. It was shortly after going down this road that the bus slowly came to a halt, and this was the moment when it all hit home. At first I couldn’t see why we had stopped . Eventually I made my way to the front with some of the other passengers, and it was then I laid my eyes on a Giant Galapagos Tortoise sitting in the middle of the road.  William told us that they have right of way and we would have to wait until it crossed the road, so the engine was turned off and we all just stared. This is when I took my first photo of these gentle animals, so serene with a majestic quality about them.

…..William told us that the tortoises had the right of way, and in no way could humans move or touch them. There was no room for the bus to go round so the driver switched of the engine and it was like an old western stalemate. Who would make the first move? Everyone on the bus was amazed, our emotions were high on the sight of our first tortoise, we were like children on a school trip, it was that kind of feeling. Trying to jostle with each other so we could take a good photograph. 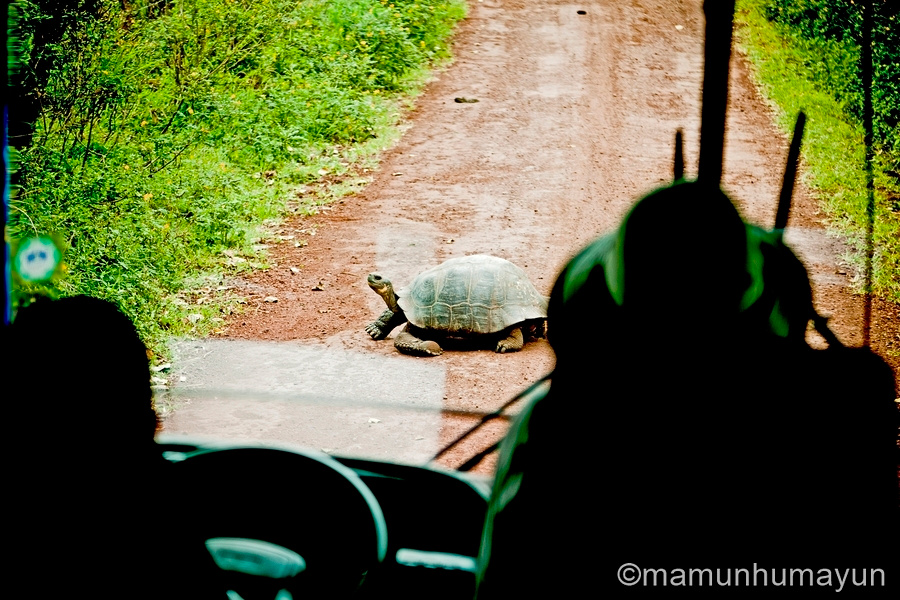 After about 10 minutes, the tortoise moved out of the way. We carried on down the beaten path. Looking outside the window, all you could see was lush vegetation, hills, and trees.
The bus stopped and William said to get ready, and reminded us to bring our cameras. While everyone had their camera ready in no time, I was thinking what gear i should take with me, by the time I decided on the lens, everyone apart from me was already outside, after a quick few seconds, I was ready to go with my canon 5dmk2 in hand.

William told us a few ground rules before we went in the reserve. The first was to not touch the animals, second was not to feed them anything, and the third was to follow him around the reserve and not to deviate from the path.. He also mentioned sunscreen due to the strong rays from the sun. After the talk we made our way, and I looked over to my right across the fields to see if i could see any. Within a few seconds, I caught glimpses of the tops of their shells. It was as though the tortoises were taunting me. I knew they were there, but they didn’t want me to see them. As we walked we all had our ‘woah’ moment. To see a Giant Galapagos Tortoise in front of us was unreal. It was big, it was huge. It’s one thing seeing these creatures on tv and another seeing it in real life, in its natural habitat. It was just slowly eating grass. It was beautiful to see. 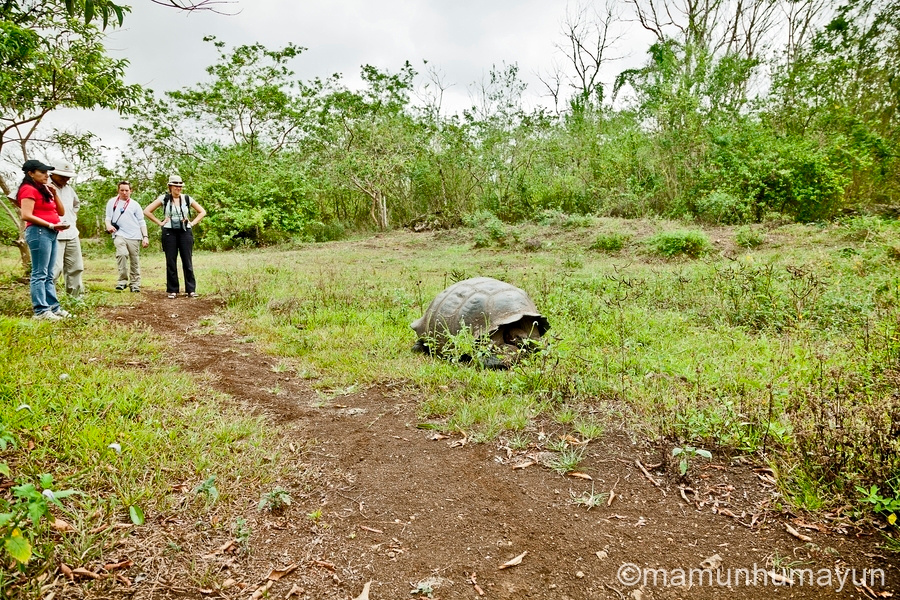 Walking round the reserve was at times just overwhelming for me. To think I was actually there and not dreaming, I was actually there with my camera, to see & smell what was around me … it was a pretty crazy feeling. What at first I thought was a rare sight, was now becoming the norm, to see these magnificent creatures, a group there, another over there it was immense. As we were walking around, I had the sense of ‘Jurassic Park’, seeing these Giant Tortoises surrounded by trees, grass and vegetation, I was expecting to see some rustling of the leaves from the bush nearby and suddenly see a small yet nimble dinosaur run past. There was an air of history, a sense that time had stood still here for thousands if not millions of years. 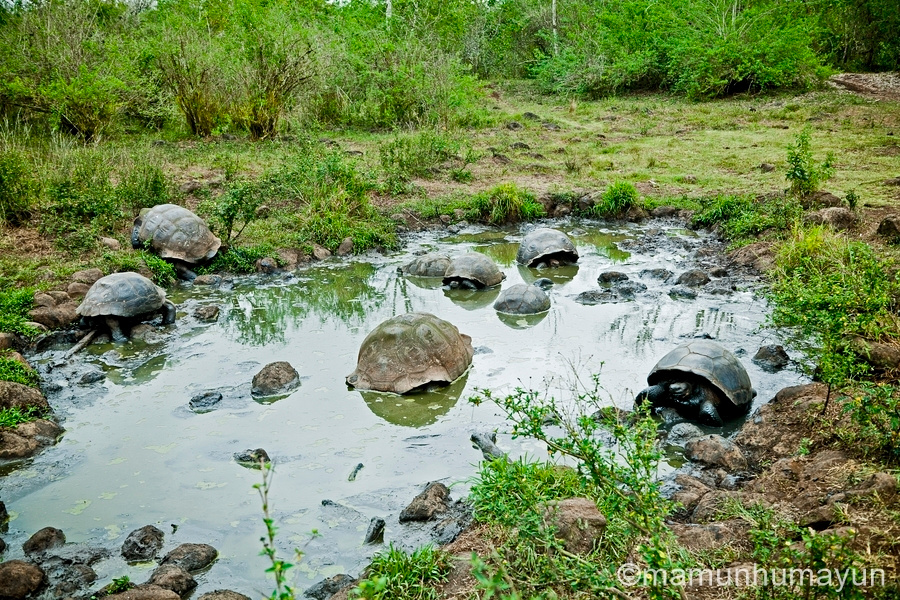 We walked past more Giant Tortoises and up a slow banking path, you couldn’t really see what was ahead.  William was talking about the vegetation and then we came across something I could only describe as ‘the pool of life’. A pool which had roughly 8 Giant Galapagos Tortoises just chilling out in the water and another 3-4 around the edge. Seeing the shells pop out of the pool, some drinking the water (albeit sipping), slowly bowing their heads just below the surface of the water. It was amazing to see and experience.

…being completely immersed in another world and having the thought in my mind that any moment another fantastical creature will slowly reveal itself from the surrounding bushes. I’d noticed noises and ruffles of sound from bushes and after a while you hone your hearing and sight and realize it’s another Giant Galapagos Tortoise chilling out. Walking around the park, seeing the rolling hills and the other Tortoises’ slowly going about their daily routine was just magnificent to witness. Our short time was up, but it seemed like we were there for a few hours.  This goes to show that you can slow down time when you’re experiencing something that will change your life. William rallied us all back to the bus.  It took a while.  Our group was somewhat dispersed, as we were all trying to take in what we were seeing in our own way and wanted to hold onto the special moment. Next stop was the Charles Darwin Research Station.   This is a biological research station that conducts scientific research and promotes environmental education for conservation.  First though we made our way to the marina to get onto our boat, the Galapagos Voyager.  This would be my home for the next 8 days. We were waiting at the marina with everyone else and more people who were waiting to be picked up by their tour operators. Looking out to sea, there was a slew of boats of all sizes, and in the distance there were cruise ships which were anchored in deep water. I couldn’t really see our boat. The radio crackled and William told us to get ready, our bags were already on board … all that was left were the passengers. It was a tight squeeze, there were about 9 of us on the panga as it swerved and cut through the waves. It was hot and it felt great. As we went past boats, we slowed down and then we saw her, the Galapagos Voyager, she would be the one who would take us around the Galapagos.

We were greeted by the crew who all looked sharp and dressed in their uniform .  They welcomed us warmly and had drinks waiting for us, after a brief introduction we were given our keys to our rooms and told to be ready in about 1 hour as we would be heading back to Puerto Ayora for our afternoon visit to the Charles Darwin Research Station.

As the coach pulled up near the entrance, we all got off and made our way in. I noticed a few buildings dotted around, but we didn’t go into them…. we headed to the enclosures.. After seeing the Giant Galapagos Tortoises beforehand, I was anxious to see them again. William took us around and explained the breeding program the CDRS were doing and how it had been a difficult process.  This was particularly true for their most famous resident ‘Lonesome George’, who was the last known individual of the Pinta Island tortoise species.

As we walked around the enclosures seeing other animals such as the land iguana’s we were told by William to meet by the pier for the trip back to the boat. ‘Lonesome George’ Knowing his history, it was humbling to see both George and the efforts made by the park rangers to find another like him. To think he was alone for all that time on Pinta, just going about his daily business without a care in the world. Doing what he does day in day out. It somehow puts life in perspective. Our boat ‘Galapagos Voyager’ was great. It had all the things that I wanted on the trip. It wasn’t too extravagant nor was it sub-standard, it was just right. Each cabin had en-suite showers with hot water. From the brochure it was difficult to gauge the size of the cabins, and the photos didn’t help either as the perspective didn’t give anything away. However I was really surprised by the size of the cabin, it was more than ample for my needs, and even had electricity sockets to charge the armada of batteries that I had brought with me.