For some reason you wake up early without looking at your watch.  The crew tap on the doors to let you know that breakfast will be served in 30mins. To wake up and see the expanse of sea scattered with  islands, is something I will forever remember. It’s something I’ll never tire of seeing in my mind and again through my photography and films. Today was 17th Jan and the excursion for this morning was to visit the island of Espanola and in particular Punta Suaraz. Like past adventures, to come to these islands and step upon the rocks and see new wildlife, the likes of which most people have and never will see up close, was humbling. The panga slowed down before approaching the landing, there was another boat ahead of us dropping of another load of visitors. It dawned on me when seeing them get off, that somehow we had all made the same choices and decision to travel here, to the Galapagos. Every one of us was drawn here for some reason, destined to visit these aptly named ‘Enchanted Isles’.

Once off, we slowly made our way to a small beach, which had sea lions, iguanas and Sally Lightfoot crabs around and about. There seemed to be a small audience of tourists admiring and taking photos of a family of sea lions who were gleefully playing just on the waters edge. William gathered us all and we began following him along the path and he again reiterated the importance of staying together, not to touch the animals and to not stray off the path. As we made our way, he began talking about the plants and answering the queried raised by our group. As we were walking, William pointed out a Blue Footed Boobie. It was a male.  As we walked further, we came across a mother and a young Boobie, it looked cute with its white afro hair. The mother was just keeping an eye on the chick.  As we casually walked by, neither of them even flinched.  They were just going about their business, even though there were people walking past. I took a few photos and managed to film them but there were other people doing the same, so I grabbed what I could and caught up with the group. We came across an opening which lead to a rocky beach with the ocean waves crashing. We slowly made our way across, closely following William staying clear of the nests which needed to be protected. By now the heat was tough, the sun’s onslaught is something which I have never experienced in my life, it felt ferocious at times. 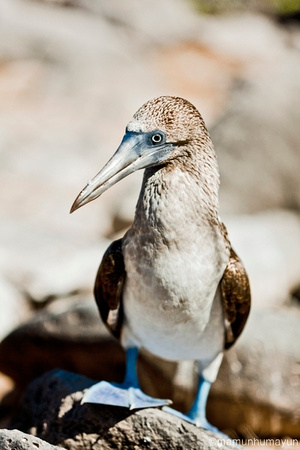 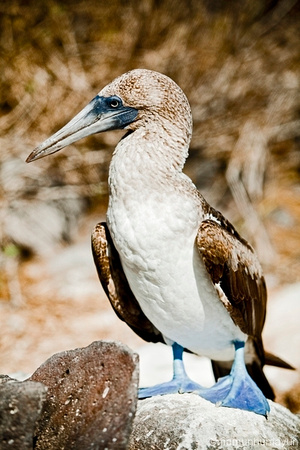 We climbed over rocks and slowly made it above the beach. We could hear the waves crashing and hissing and decided to take a break. We sat overlooking the pacific, just taking it all in. The view was just breathtaking, to see as far as the eye could see, the ocean, the waves.  It was then we noticed what appeared to be small red creatures moving over the rocks.  It took a few moments for us to realise that these red things were in fact Sally lightfoot crabs. It was truly immense, seeing all of this. I think William knew we would all be blown away by this vista, so he chose this spot deliberately. To hear the sounds of the waves crashing over the rocks was immense, the sort of loudness you’re not scared of, it was pulsating with every wave. To see the the huge spray when the water was forced  into the cracks and pushed through, up into the air was something to see. I  watched it happen at least two dozen times and never got tired. 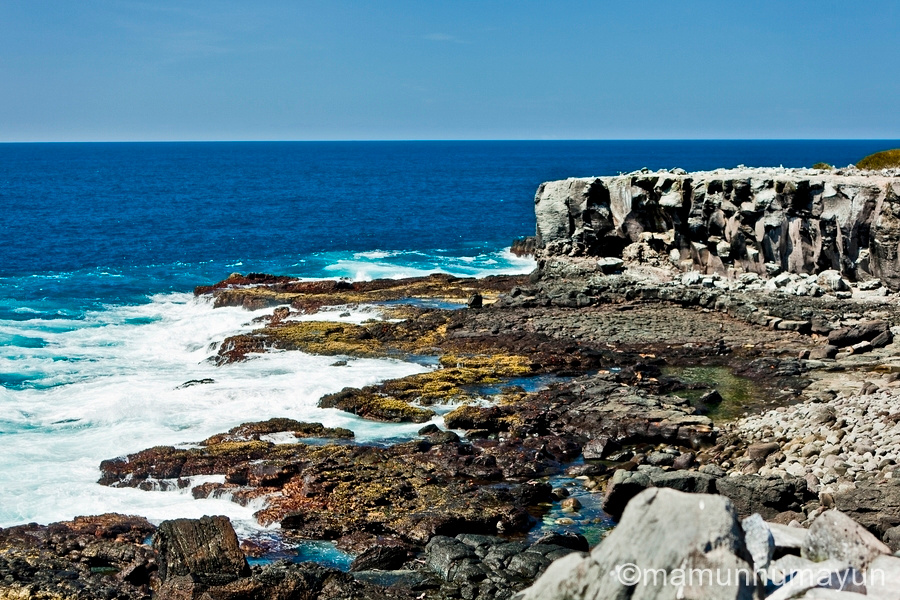 Sitting there admiring the view, a few of us walked further on but always in sight of William, one of the group noticed a group of iguana’s perched on a rock, just bathing themselves in the sun, heating their bodies up. In the air above us was a Galapagos Hawk, gliding past and using the thermals to keep itself aloft. Again, amazing to see. After our respite, William told us its time to move on, and we made our way into the land away from the seas. We came across an area which was a nesting ground and saw some Waved Albatross chicks. They seemed to be in clusters, a few families at least, tending to their young.
By now the sun was directly above us and it was hot. Even with my cap and long sleeves, it was becoming unbearable. We made our way back to the beach quickly, and boarded our panga and headed back to our boat for some lunch. After lunch, the crew asked if anyone wanted to go snorkelling and a few of us took the offer up. We got our wetsuits on and headed out on the panga.  We were about a mile away from the boat and in waters where we were told that there were an array of marvelous wildlife under the waves. With my snorkelling gear on I was told the water was  warm, so I jumped in. At first, it was cold but with the sun overhead, that soon changed. Dropping your head into the ocean and seeing life underneath the waves was beautiful. The last time I felt like this was when I went snorkeling in the Great Barrier Reef. Here in the Galapagos, after your eyes adjusted, you could see immense shoals of fish, so vivid in colour, all passing by one after the other. It was then I started to feel dizzy and nearly lost my balance in the open water. I managed to swim to the panga and climb aboard. Whilst I rested on the panga, the rest of the group finished off their snorkel. Shortly afterwards we went back to the boat where I had a shower and took some paracetamol. The afternoon visit was to Gardner Bay where there was a beach covered with sea lions. I stayed on the boat and rested  while the rest of the group went. The headache was still there and the paracetamol helped a little. I was annoyed with myself. I’d come all this way and couldn’t go on the excursion to Gardner Bay. Trivial it may sound, but for me, it was truly was one of those moments where you can’t help but think ‘when will I ever come back here again?’ The rational side of my brain kicked in and, deep down my health and well-being is paramount above everything else. That evening, at 7.30 (as always) we had dinner and after that we sat in the lounge and listened to William talk about the next day. He said it would be an early start, so we could see the sunrise. That evening the skies were clear, and the stars and moon were out.  Just standing on the deck, on calm waters, looking out into the dark blue yonder was a tender moment of reflection. With all that goes on in the world, to look up and see the night sky made me wonder about the scale of things.